By growing perennial vegetables we can save time, effort and money. Plus it’s possible to grow earlier crops in some cases. Many plants we normally treat as annuals are actually longer lasting if we change our cultivation techniques. For example, celery is normally grown as a single-harvest cut crop after which the ground is prepared for the next crop. But if the root is left it will shoot again the following spring and a harvest of succulent new sticks of celery grow from a large established root.

Celery is frequently regarded as a frost susceptible tender crop but it’s not. Celery is frost hardy. And if the frost gets tender leaves from a late frost it reshoots from the root. As the season progresses that root grows to quite a size (and has a wonderful nutty flavour, I think it’s the best bit of the whole plant). When I had my market garden we grew outdoor celery each spring. We’d grow this from seed, propagated in a greenhouse from a early February sowing, encouraged by a little heat.  Then we’d harden off the plants and plant them into a manure enriched field in March.  Frequently the frost would cause some damage but this is where we have to adopt a different mindset.  Think about it as planting the roots of the celery plant rather than the plant.  Then if the plant gets hit by frost your mind doesn’t see a disaster … it sees a slight setback. I grew a minimum of 20,000 celery in my spring planting each year and don’t recall losing more than 3-4 plants to frost each year.  Celery is so hardy. The reason that celery regrows is that it’s actually derived from a biennial native plant. But when grown as I describe it seems to last for more than two seasons, so I’d argue becomes a perennial.  Certainly the one in the photo is in its third season in our garden. (I explain the difference between biennials and perennials in my gardening dictionary).

Other plants are unarguably perennials and I’m going to add many more to this article in future weeks.  In many cases they are derived from perennial native species.  So we should be surprised that we can grow them in this way.  What is surprising to me is that we don’t focus more on perennial veg in our gardens.

Taunton Deane, Chou branchu du Poitou Vilmorin-Andrieux.  and Daubentons Kale are typical perennial kales of which there are many local (landrace) types across Europe and beyond. The great thing about these kales is that they are along lived, 6-7 years is the norm, rarely flower and are grown from sideshoots that are snapped off the plant in spring or late summer. Until recently I’d have said they were also very caterpillar tolerant, but this year Cabbage Whites have feasted on mine. However, this doesn’t concern me too much as they are big robust plants and as the caterpillars pupate they will throw new side shoots. And it is these sideshoots that seem to grow all winter and are harvested for the table. I’ve written a lot more about perennial kale elsewhere so follow this link and scroll down the page until you see it.

Walking stick kale are a tall variety that were traditionally dried to make walking sticks .. or so the stories go. They are also known as Jersey cabbage as they hail from the Channel Islands, are hardy down to 10F / -12C and prefer neutral to alkaline soils. The leaves are harvested for the table and this encourages the head of the plant to keep growing .. hence the walking sticks. Plants allegedly grow to 20ft though 6-10 ft is more common (not least because a ladder is otherwise needed to harvest them). I’m told that though the leaf is tasty it is best prepared by removing the tougher midrib. 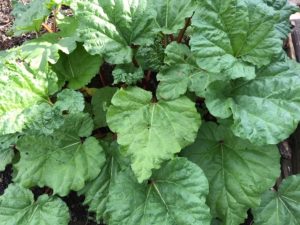 No, it’s not a fruit. Rhubarb is a vegetable.  And a very tasty one at that. And best of all its a perennial that will last for years.

Rhubarb is frequently planted as a crown ie a root with embryonic stem and leaves ready to shot out and be harvested. But you can also grow rhubarb from seed. My favourite seed variety is Victoria. the seed is low cost and very easy to grow. Which ever you go for plant out in early spring or early autumn when the crown is dormant (you could plant the seedlings anytime conditions are good provided they don’t get a frost). The ideal soil is free draining but moisture retentive. So a medium loam is ideal, but it will grow in other soils if need be. A good mulch in winter or early spring will improve moisture retention and boost growth. You could add a general organic fertiliser at the same time if you wish, but in most cases a really good m=compost mulch will be enough.

Harvest as soon as the stems are big enough. But avoid harvesting in the first year unless the plants are very strong. This way the plants will put more energy into the crown and be even better the following year. Harvesting is easy, just hold the stem by the base and gently twist. It should then come cleanly from the crown. To get good crops space the plants at least 60cm apart .. I prefer at least a metre myself as the plant then has room to spread over the following years. If the plant flowers, it’s best to cut the flowering stem cleanly from the plant. This saves it sending too much energy into the stem and seeds, that could go into growing a bigger crown. Every 3-5 year you can split a crown and transplant the extra piece. Whether its 3-5 years or more will depend on the size of the crown, so go more on size than dates. I find the easiest way to divide the crown is with a sharp spade. If cut cleanly the crown revokers quickly.

In the famous Rhubarb Triangle rhubarb growers for the crowns in forcing sheds. They lift the crown in late winter after they have been frosted (rhubarb needs frost to initiate growth) and take them into sheds where only candle light is used. The low light levels keeps the colour pale and it sells better when pale. Once harvested the crop is taken back into the fields to recover (or sometimes thrown away).

There are a host of unusual rhubarb recipes on the linked page.

Jerusalem artichokes are tall plants with a yellow flower that attracts pollinators. They make a good cut flower.  Sound familiar? The description makes me think of sunflowers. And indeed, Jerusalem artichokes are related to sunflowers.  The difference is they have an edible tuber that’s worth eating.  I like to roast them and drizzle them with lemon juice and add a little pepper. But I’m told they can also be eaten raw. Tubers are planted in late March or April (though you could start them in pots and transplant them later). Then leave well alone until harvest in November. I say leave well alone but of course, they are best kept weed-free and watered if there’s a drought.  I put mine into well-composted ground about 30cm (one foot) apart and let them get on with it. Planting at the back of a tall border is an option as they could reach 3 m in height. As for harvesting. I just gently lift them with a fork. Pull out the crop I need and leave the rest well alone to grow next year. If planting tubers for the first time put them around 6 inches (15cm) deep.

It’s easy to forget crops such as chives. They are small, few plants are needed and they are grown more as a flavouring than a portion of veg.  But how can we ignore that flavour when they are used in sandwiches with egg?  A And what about those beautiful flowers that provide so much flavour when added to a salad? If we ignore chives we surely ignore flavour itself. Chives last for years and can be grown in a pot, in the corner of a bed or even in the flower garden. Chives seem to thrive in almost any soil and can be grown from seed or by splitting an existing clump.  I give them no specific care except to harvest them.  They do however thrive best in a well drained but moist soil in a sunny spot. Chives are an allium, a member of the onion family and there are two sorts to consider, common chives, Allium schoenoprasum, and garlic chives, A. tuberosum, the latter having a distinctive garlic flavour.     There will be more perennial veg added in the next few months. What are your favourites? Comments are open for this post. Globe Artichoke Jerusalem Artichoke Perennial Kale Skirretts Sea Kale Perpetual Spinach Good King Henry Watercress Horeseradish Chicory Sorrel Tree Collards African Kale Scorzonera Egyptian Walking Onions Caucasian Spinach Dandelion Turkish Rocket
Perennial Nine Star Broccoli

To join the How to Dig For Victory Facebook group follow the link. And here is the link to UK Garden Flowers, Trees, Shrubs & More Please share this post with your gardening friends and neighbours.

4 thoughts on “How To Grow Perennial Vegetables In U.K. Gardens”