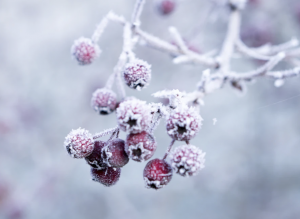 “Preparing Your Garden For Winter” is sadly misunderstood. I frequently see posts and advice saying you need to sheet down your empty beds to stop the “goodness being washed away” and to prevent weeds growing. I’ve also read that this practice keeps the soil warm.

If that’s the case why don’t farmers sheet down all their fields each autumn and close their farms down for winter? And where in nature do you see nature covering the land with plastic, tarpaulins or similar to maintain fertility and keep the warmth in?

In my opinion closing a garden down for winter is nonsense. Winter might slow growth down in the UK garden but it doesn’t stop here any more than elsewhere in nature.

Nature abhors a vacuum and as gardeners we need to bear this in mind and keep the garden alive in winter. It’s not as if the worms fly somewhere warmer in winter. They do slow down, and they will move deeper into the soil in winter, some even aestivate (similar to hibernation) and of course some are there as eggs. But they are still there in some shape or form.

So are the soil bacteria and fungi. They survive in the soil from year to year.

So our jobs as gardeners is to ensure good conditions for the worms, bacteria, fungi and other soil inhabitants. And that isn’t achieved by creating the desert-like conditions created by sheeting down with a tarpaulin. There are many much better things that can be done to keep our soils alive and in good condition.

Firstly, Disregard The Notion of Preparing Your  Garden For Winter

When we think like about closing down our gardens and allotments we are being negative. Winter is a productive time and plenty of crops thrive in winter. For example leeks will continue growing whenever the temperature rises a bit. And many brassicas continue growing. Even below grown things are happening. For example some of the starches in parsnips convert to sugar. That’s why they taste better after a frost.

And plants such as rhubarb need the cold to stimulate spring growth. Without enough frosts their yield will suffer.

And if you’ve planted a rooted plant in the autumn, you’ll find that its roots slowly grow in winter so that it is ready for a burst of growth in spring. Without enough root it can’t make that rapid top growth.

The same applies to the stems of black currants, buddleia and other stem cuttings you might have pushed in the soil in late autumn. They will be initiating root growth ready for the big rush that’s needed in spring.

By disregarding the negativity of shutting down for winter you are adopting a different process. One where winter is a time of positive preparation and growth.

Autumn Clearance of Vegetable and Flower Beds: Subsequent to Preparing Your Garden For Winter

Now that autumn is approaching we do need to harvest the crops that need harvesting. They need eating or storing. Storage is best in a cool dark place for most crops. And it goes without saying the crops need to be disease free and dry when put into storage. And while in the garden, clear up any dead or dying plants. Most of that material can be composted.

And some plants, that aren’t so winter hardy, might want covering or sheltering for the winter. That makes sense.

I’ve a very simple secret when it comes to maintaining the winter garden. Keep it alive.

And the way to do that is also very simple. It’s not sheeting it down to keep out the light and wet.  It’s to add organic matter. Preferably organic matter that is alive.  Though composted material runs a close second to live material.

But how do you add live organic matter?

Let’s start with seeds sown for winter. These will have been sown a while back and will now be planted er will have been planted in the soil. You see I believe the best way to keep soil, beds or raised beds alive it to keep them growing something. During the UK winter that might be leeks, perhaps sown last March or April; parsnips also grown last spring, brassicas that are coming to fruition now, or being planted now for the spring. There are a plethora of winter crops that the soil will feed over winter. And while it does that the crops are there for the fungi, bacteria and worms.

Growing crops is a virtuous circle of giving. Each element of the circle contributes to the other elements. For example the worms pull dead leaves into the soil, they dine on them and produce worms castes. Some of the leaves will be attacked by soil bacteria or fungi or the many micro fauna such as woodlice, ants etc. This all eventually leads to nutritionally benefits in the soil due to the breakdown of complex organic matter into simpler elements. And by this I mean the plant material being broken down AND the animals and fauna that are involved in the process.

When Preparing Your Garden For Winter it’s not just about growing crops to eat. Some can be grown for the other benefits they offer. Green Manures  and Cover Crops offer other benefits. Firstly they crowd out the weeds, out-competing them for light, space, water etc.  They also mop up nutrients and “store” them in organic form, as plant material, until such time as they themselves die and re-contribute the nutrients back into the soil for the next crop.

Some cover crops are frost susceptible and will die with the first frosts. Others will stand some frost and need killing off before the next crop is sown or planted. There are various techniques for doing this. You might lightly hoe them, scorch them with a flame gun, cover them with a light excluding material for a short period (this is different to sheeting all winter) or turn them into the soil at some stage. Tuning them in could mean ploughing, rotovating or similar.  Personally I’m against these soil turning methods in gardens. Granted farmers do them but they damage soil structure and are best avoided. I much prefer No-Dig wherever possible.

What Farmers Do With Their Crops and Fields In Winter

Farmers do as little as possible in most cases. That’s not due to laziness. Most of them try to work with nature and not against it. Granted that since the pesticide revolution some of them lost their way, but go back a few generations and farmers really understood their land and cared for it.

Some of that learning is returning. No longer do you see all farmers ploughing before sowing. Many now use minimal cultivation techniques. That’s where they either sow directly in to the field without ploughing or cultivation after buying equipment such as direct drills, OR they just cultivate the top few inches of soil.

In the last few weeks (it’s early September 2021 as I write this) the oil seed rape crop has been harvested and much of the corn is now harvested (that’s normally oats, rye, wheat and barley) and some farmers have used machinery to cultivate the top inch or so of the field. This kills many existing weeds and prompts the seeds to germinate. Often they will then leave it a few days for the weed seeds to germinate and then cultivate again to kill them before sowing the crop. And some sown crops will include a “nurse crop” to help the plants establish.

For example in the fields near where I live they included buckwheat with last years rape crop. The buckwheat grew with the oil seed rape and outcompeted the potential weeds in the early stages. Then the frost killed the buckwheat and left the oil seed rape to fill the gaps where not weed now existed. It’s a clever way to work with nature and means no herbicides need be sprayed on the crop to control weeds. That means time and money saved AND the environment benefits.

I’ve talked a lot about adding growing crops to your winter garden, but we can also add manures and composts to help with Preparing Your Garden For Winter. A good layer of either in late autumn, where no other crops are growing, will have all winter to break down more and be pulled deep into the soil by worms.

That is worth doing as the compost is feeding the soil as much as any living plant you grow there.

Having made my winter rules, now I’m going to break them. If you have a very heavy clay soil, you could plough it in autumn and leave it for the frost to break down over winter. Creating a seedbed with a “frost tilth” is a well established agricultural practice.

What About Tarpaulins In Spring?

Some gardeners spread a tarpaulin on their soil in spring to help control moisture levels and warm the soil. It’s not the same as sheeting down all winter. And if used to kill off a cover crop, by excluding the light, I agree it makes sense to do it. It’s not something farmers can do on large scale but gardeners can. So why not grab this advantage?