Before I go into my full answer about the choice between Glass or Polycarbonate, let’s start with some basics. By greenhouse I mean a walk-in structure designed to grow plants and extend the growing season. I don’t mean a cold frame or one of those standalone multi shelved units that have an extremely small footprint. I also don’t mean polytunnels . They use neither glass nor polycarbonate, rather they use plastic sheeting They all have their place in gardening but they aren’t greenhouses. 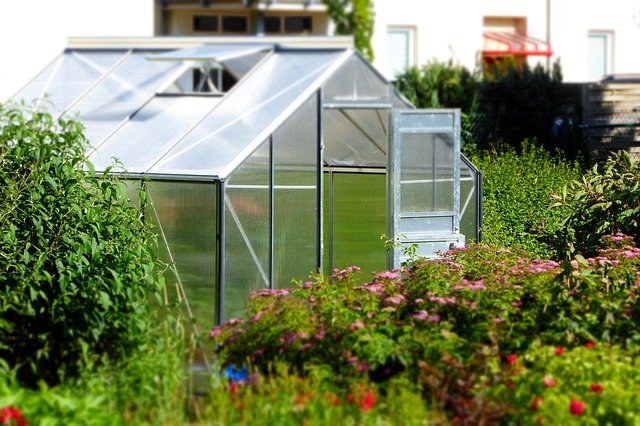 The other consideration is the size of greenhouse we are discussing. The smaller a greenhouse is the harder it is to manage the environment within it. Small greenhouses suffer extremes of heat much more than much bigger structures. However most amateur/garden based greenhouse structures are relatively small and we must ensure that they have adequate ventilation to ensure they don’t get too hot. And the ventilation should ideally work automatically so we it responds very quickly when the sun comes from behind a cloud .. because in the UK that’s the sort of weather see have.

Most automated window openers work on a bimetal strip responding to heat. They are very efficient and reliable. In commercial situation these aren’t used and the vents are often manual and stay open most of the summer, or computer controlled, and respond to the temperatures with a great deal of sensitivity.

For me the word glazing almost presupposes glass but I use it here in its widest meaning as the material used to keep the weather out whilst allowing the light in. Light is hugely important in growing plants. Without it there is not growth and the plant dies. But, equally important, plants respond to how much light they get. If sun light is reduced so too is growth rate, yield AND flavour in some crops. For example tomatoes produce more sugar as sunlight and/or potash levels increase. Get both right and you get beautifully flavoured fruit. Blaming the variety for poor flavour when sunlight and/or potash is restricted is a mistake many gardeners make.

Cost and safety shouldn’t however be forgotten.

The Benefits of Glass in Greenhouses

Glass has very high light transmission qualities. Over 90% of the light that hits the surface goes through. It does depend however on the angle that light hits it and the transmission rate decreases as the angle increases. Light rarely hits glass at exactly 90 degrees where there would be no internal reflection bouncing light back. The same principles apply to polycarbonate except that it transmits less light in the same conditions.

Data of light transmission is often skewed depending on who is publishing it .. often depending on whether they are selling glass or polycarbonate. However, I’m not selling either and do not have a commercial bias. Light transmission is also affected by the thickness of the material and what is often forgotten is that glass tends to be used as a single sheet whilst polycarbonate is usually double skinned. The figures for polycarbonate are often quoted as being single skinned however. In reality it’s not going to let, say, 85% of light though. that’s what goes through the first layer. That light is then reduced by a further 85% when it goes through the second wall of twin wall polycarbonate!

Much of the polycarbonate I see in greenhouses is twin walled.

On balance, from a light transmission perspective, glass is certainly vastly superior to polycarbonate. And sellers of polycarbonate that say it lets enough through don’t understand plants and gardening.

Glass is heavier than polycarbonate. And it really depends how important this is or isn’t to you. Greenhouses should be secured firmly to the ground so weight has no relevance in that respect. What matter more to me is rigidity and I deal with that below.

Glass is a rigid material compared with polycarbonate. It adds strength to a greenhouse that polycarbonates lack. The rigidity means the greenhouse is much less likely to suffer storm damage.

As an aside, many professional/commercial greenhouses depend on the rigidity of glass for their structural strength. This surprises many people who consider glass to be fragile. In my experience glass is very strong and rarely breaks. And my experience is based on owning half an acre of glass for more than ten years. Breakages were extremely rare.

On the question of rigidity polycarbonate is hard to clean with a pressure washer. If the jet is hard enough to clean the surface it often pushes the polycarbonate sheet out of the frame.

Algal growth occurs on both glass and polycarbonate and can be pressure washed off. However, any algal growth within the space between the polycarbonate layers can’t be cleaned out. Plus polycarbonate tends to discolour over the years .. especially the cheap stuff. And discolouration leads to lower light transmission.

I’ve seen it quoted that glass isn’t as good as it needs cleaning ever 2-4 weeks due to algae and hard water deposits. But of course polycarbonate gets as many deposits, but they are harder to see as light transmission is lower. Hence growth in the greenhouse is slower.

Many sources claim that polycarbonate diffuses light. Though why that’s an asset defeats me. Those that make the claim say that plants can’t stand direct light via glass. I have to say that having owned large commercial greenhouses I never experienced that problem. And I’ve never met a commercial grower that has complained of it with commercial salads and similar crops. Light is essential and why we scrupulously cleaned glass each year.

Polycarbonate is made from oil and eventually breaks down into toxic compounds. Glass is just plain silica, a natural product, and will eventually return to its mineral state with no pollution problems.

Replacement Cost and Ease of Purchase

Glass companies abound. There are several within a few miles of where I live. So replacing glass, if needed, is easy. Polycarbonate is not so easily sourced. There are fewer suppliers.

The Benefits of Polycarbonates in Greenhouses

We have to consider where a greenhouse might be installed. If in a garden, with children playing nearby, then breakages are more likely. A stray ball can soon break a sheet of glass! And broken glass is potentially very dangerous.

From a safety perspective, especially if children are involved, I’d go for polycarbonate every time.

As a commercial grower we had great respect for glass. I’d clean it each year by walking in the gutters between greenhouse bays and not be overly worried about the height or potential danger of falling. But, in a storm, I’d not venture around the greenhouses. One stray sheet of glass flying through the air could decapitate me. It’s that dangerous. Having said that, a strong wind isn’t an issue and in ten plus years I only experience 2-3 storms that worried me. On nights like that you’d go to bed and wonder if you would have any greenhouses next day. I always did though, they were strongly built and the glass gave them strength.

Twin walled polycarbonate sheet is a much better insulator that 3mm float glass. But do we want a greenhouse to provide insulation? In hot weather we can open the vents. In cold weather it isn’t actually going to affect overall temperature in a greenhouse, just the speed it changes temperature. Even then the time delay isn’t much.

Glass or Polycarbonate – My Conclusions

So those are my views on the choice between Glass or Polycarbonate of greenhouses. they are a personal view based on my years as. commercial grower with half an acre of greenhouses and a further half an acre of polytunnels. That experience is also influenced by my years as an amateur gardener using a small greenhouse with glass glazing. I use glass from preference as I consider it far superior to polycarbonate for. whole host of reasons.

And here is the link to UK Garden Flowers, Trees, Shrubs & More

4 thoughts on “Greenhouse: Which Is Best, Glass or Polycarbonate?”