There Are Many Exotic & Unusual Fruit That Can Be Grown in the UK. Here’s My List of Unexpected Fruit For Gardens & Greenhouse Growing And How to Grow Them.

Because what is unusual today is likely to be common tomorrow. for example tomatoes were unknown before Elizabethan times and were certainly thought to be rare, unusual, exotic and poisonous for many years. And the closely related capsicum family of peppers and chillis were very unusual when I started my market garden. But within a few years, they became commonplace and no one thinks of them as unusual fruit today.  They certainly aren’t regarded as exotic fruit and aren’t rare.

And what about grapes? They are commonly grown in gardens today and we have vineyards producing wine across the country.  Most are in the south but three are north of York. There are none in Scotland and not many in Wales. So maybe the location dictates what is unusual.

Prior to the Romans introducing vines to the country, grapes were unknown here. And it was the Normans who expanded viticulture even further.

Later, as the British travelled further, the growth of the Empire saw unusual fruit being brought back to the UK.  And, in the 1960s, the growth of overseas holidays broadened our palate and expectations of food.  So unusual and exotic are time-related as well. 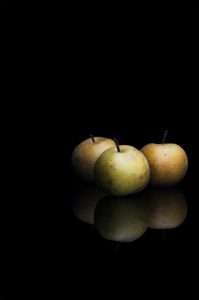 If you cross a pear with an apple you’ll end up with a fruit that looks like neither. But you will have an eating sensation. Asian pears have rough amber or yellow-green coloured skin (depending on the group) which hides a firm and succulent white flesh with a wonderful flavour. The tree looks more like a pear than an apple. It has umbels of white, hawthorn scented flowers, with a pink/red centre. These sit amongst glossy green leaves. But when in full bloom the tree looks white with barely a leaf visible amongst the blooms. Asian Pears need a warm sunny spot as, though they tolerate cold in severe winters, the flowers are frost prone. An ideal way to grow them in most cases is as a cordon against a south-facing wall or fence. There are several cultivars suitable for UK growing. Few nurseries stock them but those that do can advise on the cultivars to use. Beware though, there are two distinct groups available, hence the skin colour variation, and it’s necessary to select the right one. Asian pears are slowly coming “west”. they’ve been grown commercially in Australia since 1980 and in Cyprus since 2010. The UK next maybe! Asian pears are available in supermarkets, often sold as Nashi pears. Their high price is indicative of the distance they travel and transport difficulties due to bruising problems.

As previously mentioned the tree does best as cordons against a south wall. But they need to be cross-pollinated with a compatible variety. They will start bearing fruit after around four years but do need winter chill to yield well. In many senses that makes them ideal for the UK. Plant in well-drained slightly acidic soil within easy reach of their partner pollinator. Grown well the trees crop for at least 20 years. If the tree sets too much fruit it may need fruit thinning .. but cross that bridge when you reach it! It’s often advised to thin back to the best 2-3 fruit. The trees are prone to codling moth so use pheromone baited traps.

Let the crop ripen on the tree, which happens in mid to late autumn. The best indication they are ready is when a few fall to the ground. At that time start testing the rest for ripeness. Ripe fruit will fall into your hand if gently tugged. If you get a glut .. and don’t be surprised if you do. Try trading them for other crops or try drying them. Slicing thinly and dehydrating them concentrate the sugars. Delicious.

Bananas in the UK?

Yes, it’s possible. But let’s first get a few facts sorted out. It might be called the Japanese banana but it comes from China!

Secondly, basjoo is hardy down to around -15C. But that’s not the same as saying it will survive our winters. In most cases it’s not the cold that will kill it however, it’s wet weather. Musas like high humidity when growing and are thirsty plants, but sitting in the cold and wet isn’t something they enjoy. So they need winter protection.

Musa basjoo is a plant that produces suckering roots and even if the top is taken back by a frost the roots can survive. But this sets it back and it will need a long season to grow a new “stem” and start to flower.

On the plus side, the winters in the UK are getting warmer and the chance of Musa basjoo fruiting is much higher than a few decades ago. It isn’t 100% sure but most years it produces very strange-looking flowers. The trick is now to ensure they grow into healthy bananas. In a sheltered warm position that is possible and frequently happens. But I stress the need for a warm sheltered position as the plant loves warm nights and stops growing below around 16C.

There’s a bit of bad news that you need to know before growing M. basjoo. Though it can fruit in the UK, most people consider the fruit inedible! No one said growing was always perfect! It is however a stately and majestic plant to grow in any UK garden. The other good news is that there are other exotic fruits that can be grown in the UK and are edible. And some are delicious.

M. basjoo grows very well in parts of Cornwall and gets very big. It’s also long-lived. One in Lanarth on the Lizard Peninsula is reputed to be over 100 years old.

Are Pomegranates An Unusual UK Fruit?

We see them in the fruit shops and supermarkets so pomegranates don’t seem very strange to most of us. But what about growing pomegranates in the UK?

Surprisingly to many people some pomegranate varieties can cope with our cold weather and will tolerate temperatures as low as -15C.  They will need a mild autumn to finish ripening but they ought to be more widely grown. They grow best in sheltered spots with alkaline soil and need feeding in autumn and early spring to do their best. Rather than try to grow them from seeds, the best way to propagate pomegranates is by cuttings.

Pomegranate trees (they get quite big)  fruit when at least five years old. So don’t expect miracles right away.

Snails and slugs can damage your plants and aphid are a known pest of older plants.

Persimmons, Sharon Fruit or Kaki Growing in the UK

Whatever name you choose to call them by persimmons are an unusual fruit to grow in the UK and many would consider them to be a truly exotic fruit. But persimmons are another very hardy plant that can grow here and they produce orangy yellow fruit that is both sugary and tasty.

The fruit will continue to ripen after the leaves fall in autumn and I’ve seen photos of trees bearing fruit covered in snow.

Unlike pomegranates, persimmon prefer slightly acidic soils, preferably a well-drained, deep soil that is fertile and in a warm sheltered position.  And though they tolerate the cold, they naturally do better in a greenhouse.

Again, this is a fairly big tree once grown, though you can prune them. So space them well apart. six metres apart if you are going to try for a full-size tree.  Though I’d personally to grow them fan trained on a warm south-facing wall.

Aphids are the most common pest on Persimmons but watch out for scale insects as well.

Often called Japanese Wineberries these fruiting plants are similar to raspberries in some senses but, being a rubus they are from the bramble family (which is in the rose family) and have spines along the stems. They also ramble more than raspberries, so are different in that respect.

My suggestion of being similar to raspberries is that, like autumn bearing raspberries, they bear fruit on last years growth. They are also sometimes referred to as wine raspberries .

Plants are propagated from hardwood cuttings and root easily.  Rooted plants have been available from many seed companies in recent years and they grow well in the UK.

Wineberries do best in well-drained soil in a sunny position and love good mulching after planting in the autumn.  The mulch helps retain the moisture that they will benefit from when growing the fruit.

Wineberries can be grown in the garden but also do well in food forests.

The fruit is ready between summer and autumn raspberry seasons and is sweet but tart with it. They are good in pies.

Wineberries originate from China Korea and Japan and perhaps bring a taste of oriental exotic fruit flavours with them.

I like the idea of wineberries as they are perennial and just keep giving.

Boysenberries Are A Hybrid And Unusual Fruit For UK Gardens

Boysenberries and another Rubus species but this time it’s a hybrid produced by crossing a blackberry with a loganberry and, according to some sources, a few other plants.  The result is a vigorous rambling plant (similar in habit to brambles) that produces a large black, juicy, sweet fruit. The flowers are self-fertile.

It was first propagated by Rudolph Boysen, hence the name, when he was Superintendant of Parks in Anaheim, California.

The plants aren’t common in the UK, though several nurseries sell them.  In the USA they are more common and used to produce fruit for pies, jams, juices and ice cream.

In Australia, they have been crossed with Marionberries (a blackberry cultivar developed in the USA) to produce the Sylvanberry.

I’ve no experience of Marionberries or Sylvanberries but can see no reason why they shouldn’t do well in the UK.

More Unusual and Exotic Fruit to Follow  … Watch This Space.

Can Bananas Be Grown In The UK?

Yes, they can and some, such as Musa basjoo, will even produce fruit. There are details of how to grow them and other exotic fruit on the Bite Sized Gardening website

Can Pomegranates be Grown In the UK?

Yes, they can they produce tasty fruit. There are details of how to grow them and other exotic fruit on the Bite Sized Gardening website

Can Persimmons Be Grown In The UK?

Yes, they can and produce good fruit. There are details of how to grow them and other exotic fruit on the Bite Sized Gardening website

Can Wineberries Be Grown In The UK?

Yes, they can and they produce plenty of fruit. There are details of how to grow them and other exotic fruit on the Bite Sized Gardening website

Can Boysenberries Be Grown In The UK?

Yes, they can and they produce plenty of tasty fruit. There are details of how to grow them and other exotic fruit on the Bite Sized Gardening website

How To Convert A Lawn or Pation Into A Veg Plot... The Easy Way